Makkena Anjaneyulu, M.Sc, B.Ed(Rtd) A.D, A.P GWD, spoke about various aspects relating to the origin, occurrence and management of Groundwater. He started the lecture with Hydrological cycle and explained in detail about the various processes involved in it. He explained about the process of infiltration and how the process helps in the formation of groundwater. He explained that the water is distributed in the form of zones vertically below the ground surface and the zone immediately below the ground surface is known as zone of aeration and the zone below to it as zone of saturation. 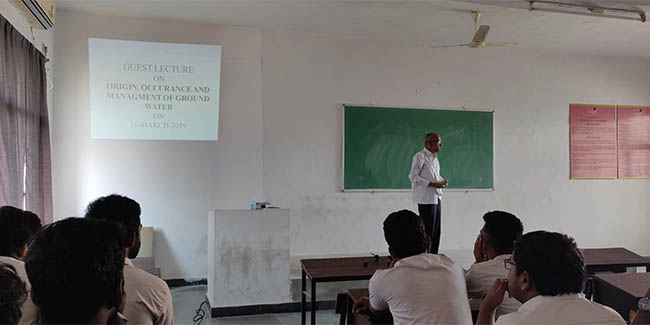 He also spoke about the various methods of artificial recharge carried out to increase the groundwater level. He listed out the methods namely basin method, flooding method, ditch and furrow method, percolation method, recharge well methods etc. He continued that these methods are to be specifically chosen depending on the type of aquifer, formation and soil present in a given area.

He concluded the lecture by suggesting the integrated management of surface water and groundwater. He added that this conjunctive use helps in reducing the water logging effect in areas and improving the groundwater levels in over-pumping areas.